Why does my milk taste different

Written by Yulia Klimanova
Posted in Research on 12 maggio 2022 We are used to the standardised composition of milk, which we can easily read on the nutritional label, but sometimes we find that milk tastes different in different countries, regions and by season. What is the influence of seasons, feed, and cow breeds on the macro and micro composition of milk and its nutritional qualities? We are going to figure this out!

There are several factors that can affect the composition and nutritional quality of milk: feeding system (pasture or silage fed) and quality, location and season, stage of lactation, cow breed and health status, and milk processing conditions. When we talk about composition and nutritional quality, we mean the content and quality of the main components: Proteins, fats and sugars, mainly lactose, as well as the mineral concentration.

The first factor we will discuss in more detail is feeding-related (dietary intake and seasonal/regional effects). As has been noted [1], they affect all the main groups of milk constituents. Studies confirm that pasture milk has a higher fat content than total mixed rations (TMR). Researchers [2,3] link this to the additional non-structural carbohydrates that TMR diets deliver to the small intestine. These carbohydrates can reduce the total fat content of milk by increasing the total fat yield.

Certain plants can also affect fat yield in milk. For example, the addition of white clover to cow diets reduces the total fat content in milk because it passes quickly through the rumen and consequently increases the fermentation rate of the feed. This reduces the production of substances involved in fat formation in the mammary gland. In conclusion, TMR feeding results in higher milk yield, but the fat content in the milk of cows fed pasture forage without white clover is higher. 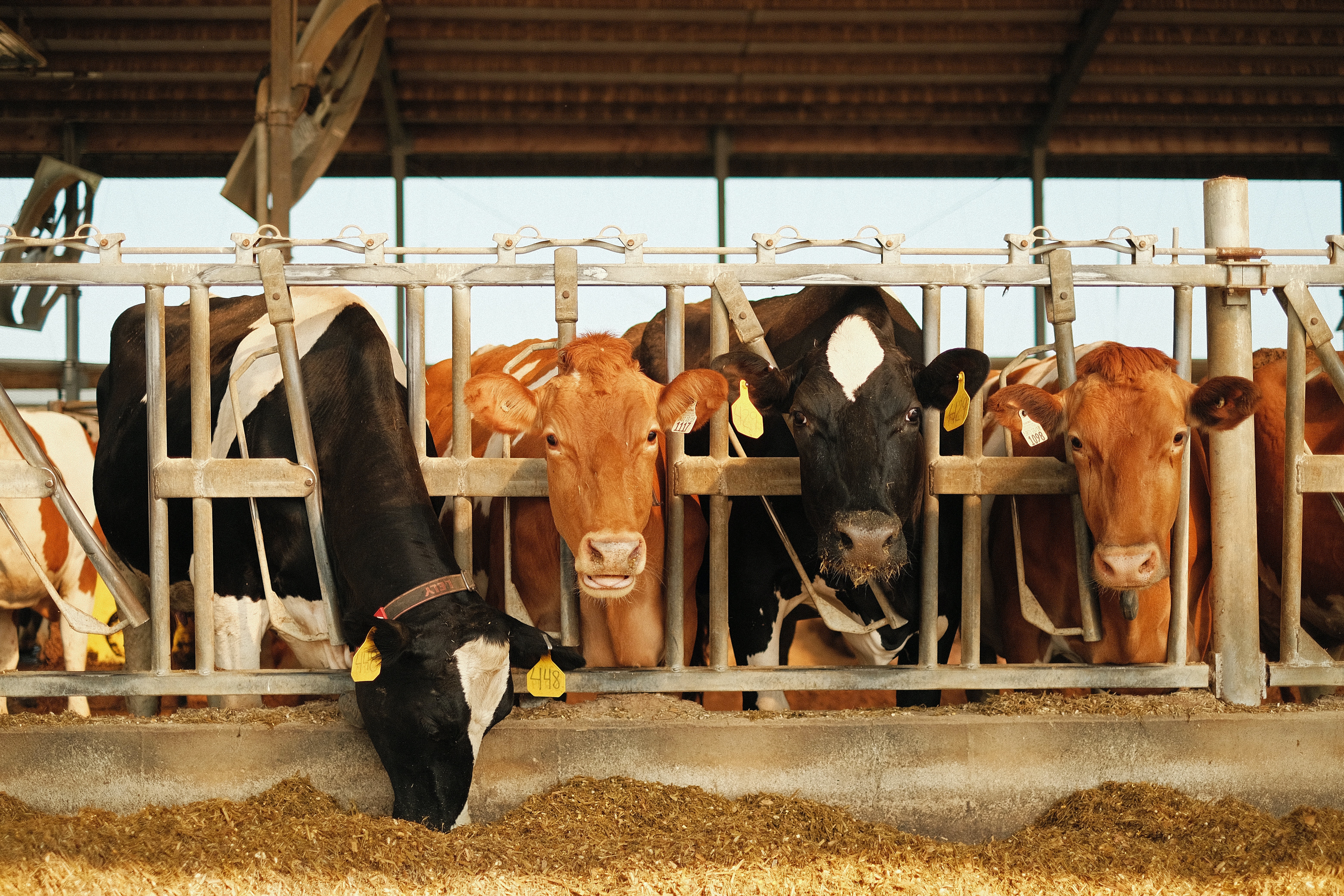 Feeding systems also affect the structure of fats, especially the fatty acid profile (FA) of milk. Fats are composed of individual fatty acid molecules bound to glycerol, a three-carbon backbone. Because there are many different fatty acids that can be bound to the backbone, there are many different types of triglycerides or fats. Over 400 fatty acids have been identified in milk. The FA profile influences the functional and nutritional properties of milk. For example, rumenic acid, which accounts for about 90% of the total conjugated linoleic acid in dairy products. Consumption of this fatty acid with milk has been associated with improvements in cardiovascular health, immune function, and reductions in triaglycerol, LDL cholesterol, and total cholesterol in the plasma of healthy men. Eliminating pasture from cows' diets reduces the amount of rumenic acid in milk fat compared to cows on pasture.

Milk proteins also depend on the cow’s diets nutrition profile. Milk proteins are highly nutritious and are considered a high-quality source of protein because they contain branched-chain amino acids that play an important role in metabolism, such as muscle building. In addition to their nutritional value, milk proteins also have numerous functional properties. For example, the whey protein Beta-lactoglobulin has excellent foaming properties, which is important for the coffee industry.

Regarding the main carbohydrate in milk, milk sugar (lactose), this component is usually lower in milk from cows fed pasture feed compared to TMR, because the addition of starch in TMR results in a higher energy intake. However, this depends on the TMR feeding system and some studies [6] do not confirm these results.

As for the mineral content in milk, it was found that it generally does not change significantly with feeding. However, some minerals such as iodine and calcium depend on feed. Feeding indoors results in a higher concentration of iodine in milk compared to feeding outdoors in summer. The high proportion of perennial ryegrass in cow diets resulted in a higher calcium concentration compared to feeding TMR indoors.

The content of fat-soluble and water-soluble vitamins, except vitamin K, in milk depends largely on the feeding system. The addition of corn or grass silage to the feed lowers their concentration. This is due to the lack of vitamins and carotenoids in preserved feed compared to fresh grass.

The second combination of factors that affect the milk nutrition profile is the location of the farm and season in combination with the stage of lactation (SOL). There are several SOL during the year, including early SOL (March/April) and late SOL (October/November). 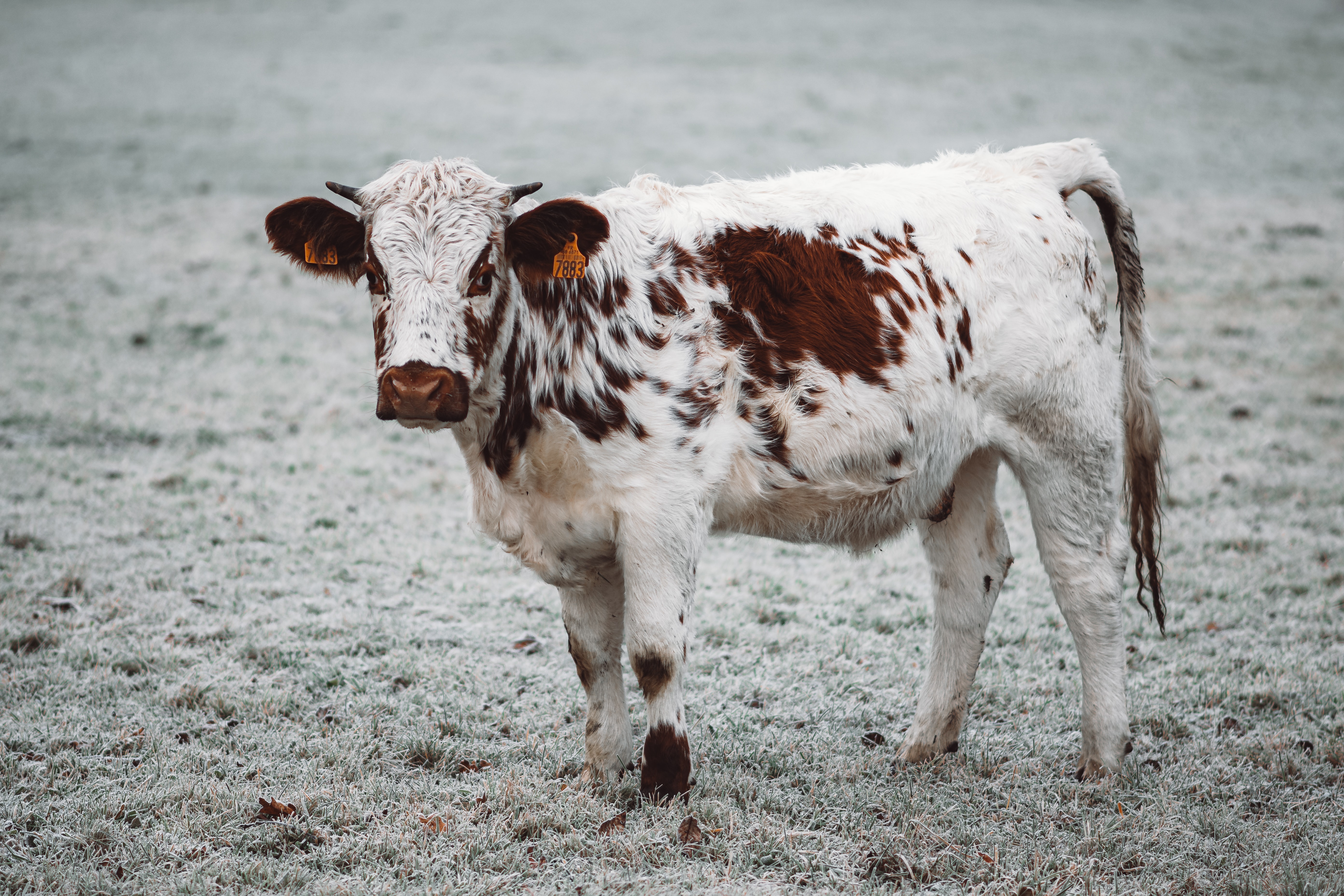 The highest fat content in milk was observed in winter when supplemental silage was introduced into the diet compared to the lower amount of fat associated with pasture forage in summer. The fatty acid profile also changes depending on the season. For example, in May, when grass is less mature, concentrations of conjugated linoleic acid (CLA), which has been shown to have several potential human health benefits, including potent anticancer properties, were higher than in mature grass at the end of summer, when grass is fresh and leafy.

The decline in protein content, unrelated to diet, was observed throughout the early SOL and is strongly associated with it. Both whey proteins and caseins in milk reach their higher concentration in October/November during the late SOL. This variation depends on the physiological changes in the mammary gland, which are sensitive to the SOL. Apart from the physiological changes in the epithelial cells of the mammary gland, the limited availability of amino acids in the grass during spring and late autumn has reduced the casein content in milk.

Generally, lactose content is higher in summer milk, as opposed to winter milk, when fresh grass is replaced by ensiled grass silage, but not with TMR system with high starch content.

Concerning minerals and vitamins, the concentration of riboflavin (vitamin B2) and vitamins A, D, and E in milk increases in spring and early summer when pasture feeding predominates. The fourfold increase [1] in vitamin D concentration in summer is related to the influence of summer radiation. In contrast, according to some studies, vitamin C content is usually higher in winter [7]. Nevertheless, milk is not the main source of vitamin C in our diet, as its content decreases noticeably during processing and storage, which is related to its oxidation leading to loss of vitamin activity. 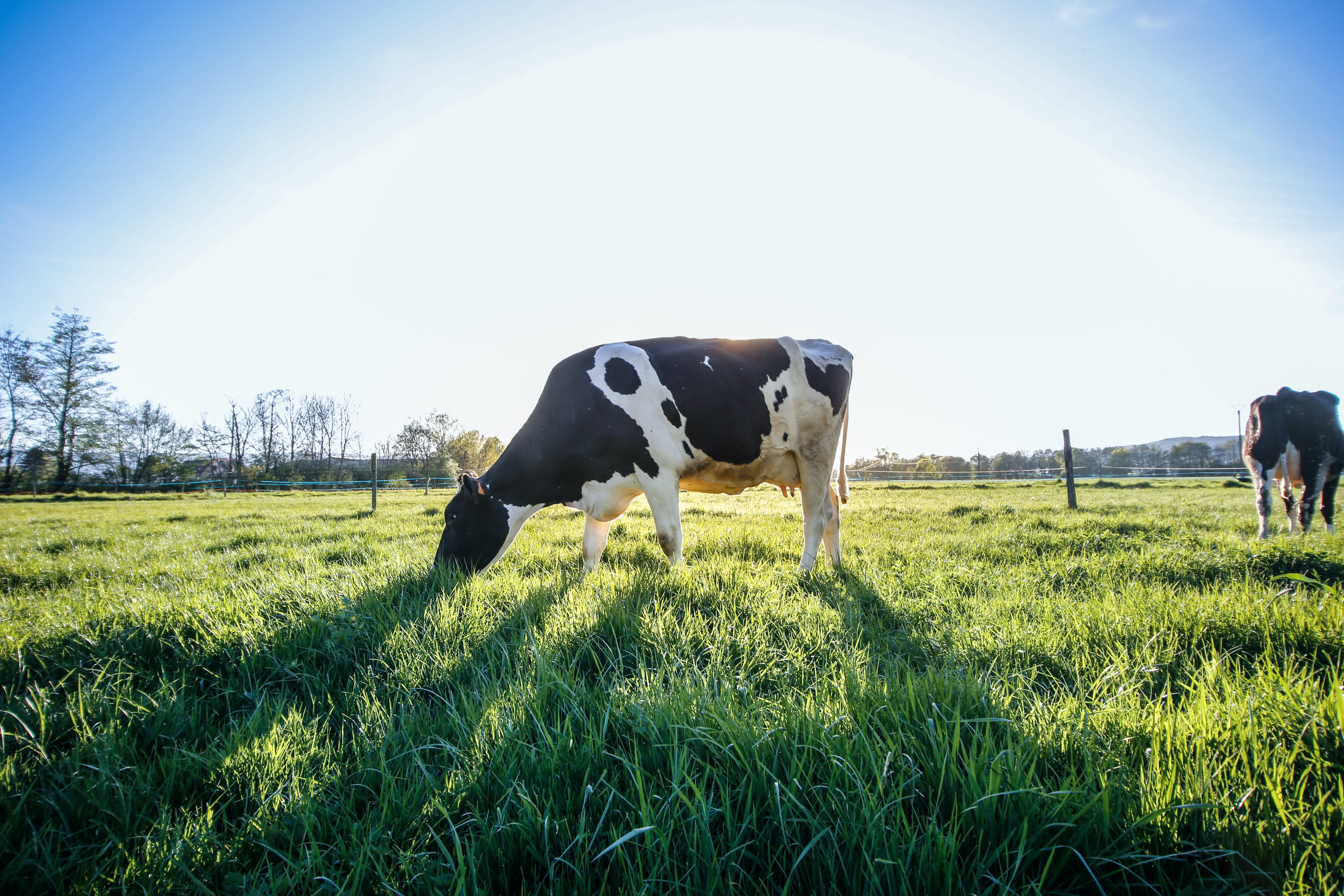 As for genetics and its dependence on milk composition, we should mention that there are some of the most popular dairy cow breeds: Holstein, Jersey, Brown Swiss, Guernsey, Milking Shorthorn and Dexter. It has been studied that Jersey cows produce more fatty milk than Holsteins regardless of their diet. At the same time, Holstein cows generally produce more milk than Jersey and Brown Swiss cows, which is associated with lower fat and protein concentrations. Milk from Jersey cows is also higher in short-chain fatty acids than Holsteins and Brown Swiss and has a saturated fat profile of higher nutritional quality. In contrast, Holstein milk is rich in major isomers of conjugated linoleic acid.

Lactose content is mainly influenced by feeding system and SOL, but not by breed. No significant difference in lactose content was found between different breeds.

Genetics also has a noticeable effect on the mineral content of milk. Researchers [1] found that milk from Jersey cows has higher calcium and phosphorus levels, but lower sodium and chloride concentrations than that from Holsteins.

An important example of the negative influence of feed quality, cow health and SOL is lipolysis. We have discussed this phenomenon previously, so here we can only add that the compound known as lipoprotein lipase causes lipolysis of milk fat triglycerides with the formation of free fatty acids (FFA). High concentrations of FFA (more than 1.5 mmol/l) worsen the ability of milk to foam by reducing surface tension at the interface between air and bubbles. The presence of lipoprotein lipase in milk is considered a side effect and has no known biological purpose. The process of lipolysis can be triggered by mastitis (inflammation of the mammary gland), low-quality feed, delayed SOL, and mechanical treatment of milk such as homogenization.

To conclude this review, it is important to mention the advantages and disadvantages of TMR and pasture-based dairy systems. TMR allows control of cow nutrition throughout the year, ensuring stable nutrient yields and milk production. However, this leads to higher feed and operating costs, a higher carbon footprint, and raises animal welfare issues. Grazing is more acceptable in terms of environmental and economic impact, even if it leads to some variation in the composition of the milk. 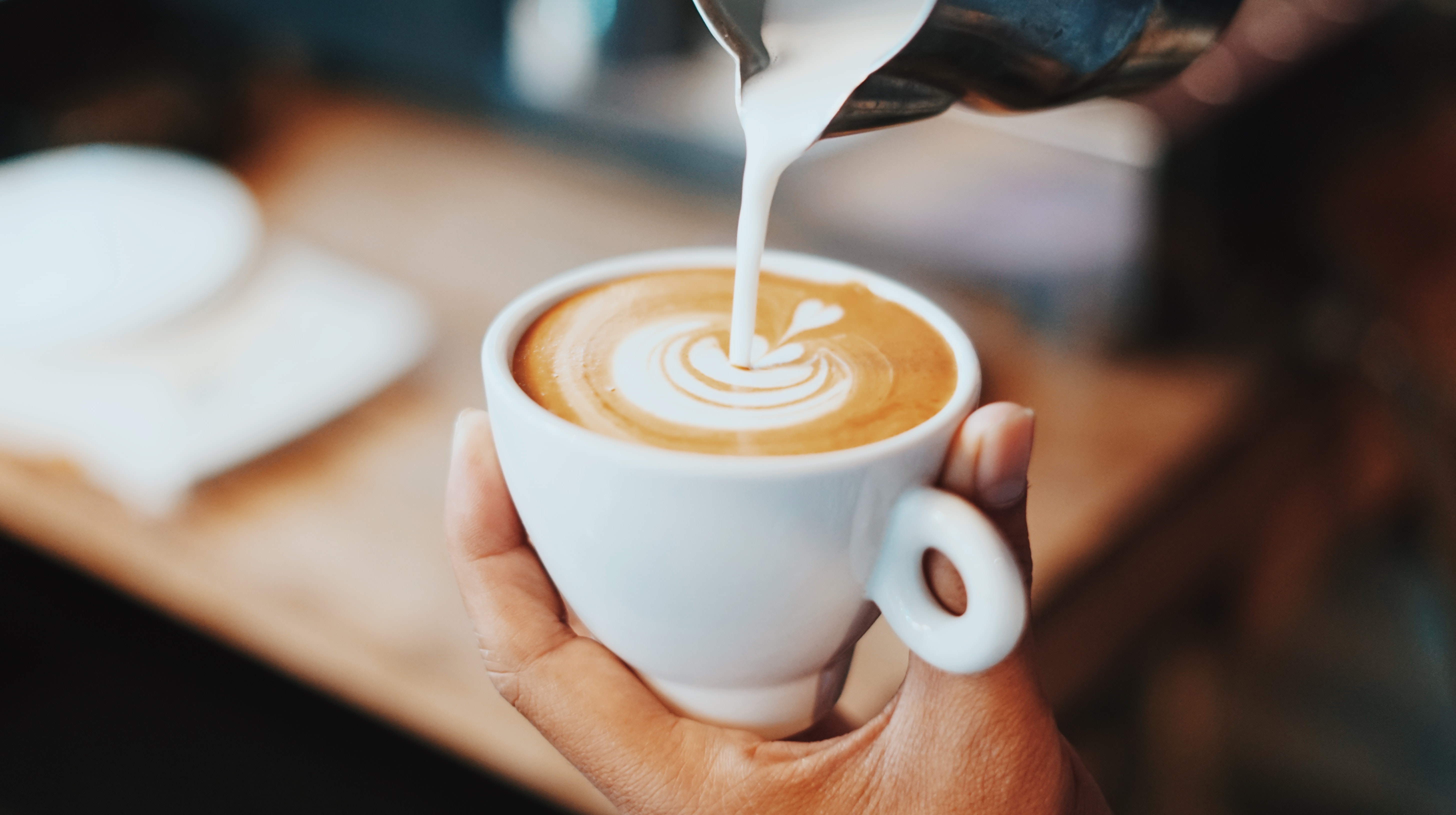 This overview of factors affecting milk composition at micro and macro levels impacts the physical and chemical properties of the milk in our coffees. This knowledge can help professionals predict the behaviour and quality of milk depending on its origin.

It is valuable to think of milk as a dynamic ingredient with your coffee. Review the flavour profiles and steaming properties of different milks regularly to pair them with your coffee for the optimum drink. 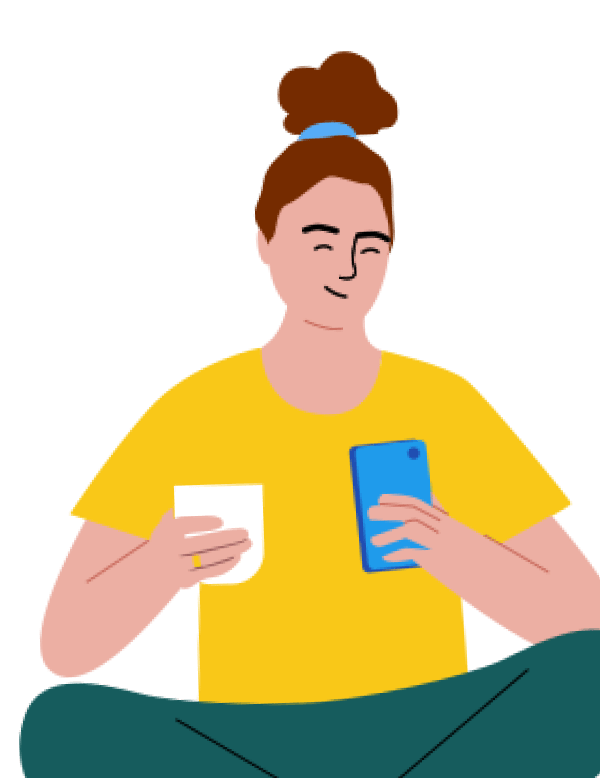